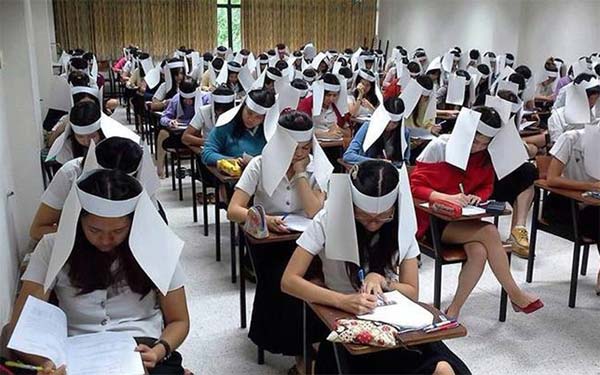 Students in Bangkok’s Kasetsart University have been forced to wear anti-cheating blinkers to prevent them from cheating during exams.

The low-tech anti-cheating helmet invention doesn’t look sophisticated, but would function like horse blinkers and prevent wearers from glancing to the side — which should prevent any sneaky peeks at neighbours’ answers.

The photo was posted on University’s Facebook page and it quickly went viral and ignited the controversy when many people shared their views against the anti-cheating blinkers. The image was later removed from Facebook and the board explained that the anti-cheating hats were considered necessary because the room was small and many students were taking the exam sitting close to each other.

Husband Built Stone Tree In Memory of His Wife