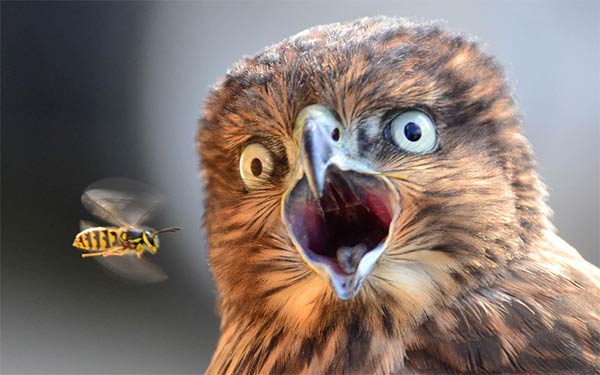 What’s more annoying than when you’ve preened and groomed, ready to pose for that perfect portrait… only to have it photobombed by an idiot? No wonder this hawk looks so cheesed off after a wasp flew into frame just as he was about to have his picture taken.

The bird of prey looked wide-eyed and open-mouthed at the insect as it buzzed boldly around his head during the shoot in Seattle, Washington, looking angrier by the second.

Elena Murzyn, 22, captured the image of the Cooper’s hawk looking startled as the yellow and black striped insect buzzed in front of him in Seattle. Refusing to have his moment in the spotlight ruined, the hawk then tried to eat the wasp, but it danced about his snapping beak before flying away to safety.

Every Christmas, This Photographer Turns His Dog Into Different Animals

Around The World, Humor, Inspiration

Brave Dragonfly Lands On The Head Of A Gecko

Even In The Bad Situation You Have To Be An Optimist

Jahangir Agha, 5 years ago 1 min read
Around The World, Humor

10 Humor Sites To Visit When Bored