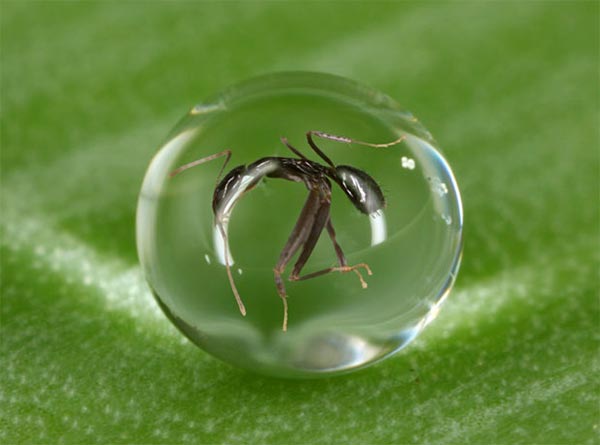 Trapped in a tiny perfect sphere of water, this unlucky ant is unable to escape. A sudden downpour gave it no time to take cover, and photographer Adam Gormley was there to snap the image. Adam, from Noosaville, Queensland, Australia, had been photographing spiders in his neighbor’s garden when the rain came down.

He had no idea there was an ant in one of the three millimeter droplets until he viewed the images later. He said: “I thought it was some dirt inside the drop, and it was not my main focus, I liked the way the drop was sitting on the aloe-Vera leaf, with the tiny hairs. When I uploaded the shot to my PC, I viewed it large, and I think I shouted out loud in excitement when I realized what I’d captured by accident!”

Around The World, Humor, Photo of the Day

Daring Damselfly Landed on The Head of Chameleon

Famous Faces In A Crowd