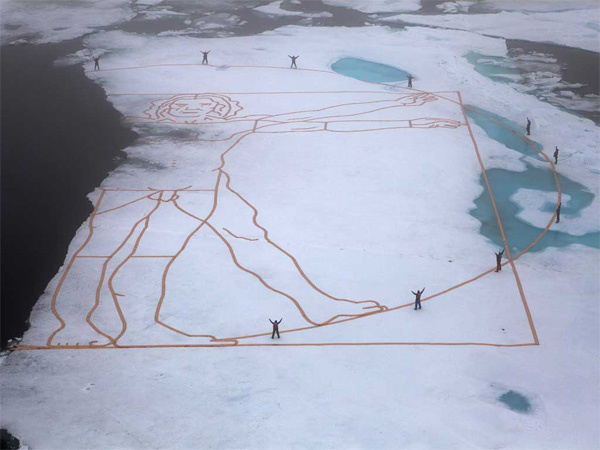 A giant version of Leonardo da Vinci’s famous sketch ‘Vitruvian Man’ depicted melting from the sea ice into the Arctic Ocean has been constructed just 800 kilometers from the North Pole, as a call for urgent action on climate change.

Greenpeace-commissioned artist John Quigley, traveling on board the Arctic Sunrise, made the massive ‘Melting Vitruvian Man’ — the size of four Olympic-sized swimming pools — to draw attention to how climate change is causing the rapid melting of sea ice to outstrip predictions.

Quigley used copper strips normally used to create solar panels to recreate the 500 year-old drawing. “Literally climate change is eating into the body of our civilisation,” he explained.

All materials were removed after construction and the copper will be reused.

How Well I Know My Motorcycle

Creative Illustrations Made Out of Dirt

Life-size Motorcycle Built Out of 20,000 Candies